The Mall in Shimla

Shimla has many wonderful places and buildings that have actually contributed in the upscale of a small village to the “queen of the Hills.” Certain places in the Shimla have got worldwide fame. Without these places, Shimla cannot exist. The Mall in Shimla is the core of the city and it has become synonymous with the state capital for its appeal and colorfulness.

About The Mall in Shimla

The Mall in Shimla City is the “heart of the city”. It is around this place, several restaurants, offices, pubs and numerous shops are present. When visitors talk about shopping in Shimla, the first place that comes in their minds is the Mall Road. The Mall is one of the busiest places of Shimla City and from here visitors could walk down to several important places around. Visitors can take a stroll along the Mall Road to visit the important cultural and social places of Shimla. No vehicles are allowed in the Mall Road.

The Mall Road starts from Barnes Court on the east and extends to the Vice Regal Lodge on the west.

Markets around The Mall in Shimla

The Mall houses numerous eateries, restaurants and pubs. Food freaks could get dishes of north India especially the Punjabi delicacies and the local delicacies as well as the south Indian dishes. You can even get Chinese and Continental dishes in these restaurants. Numerous fast-food outlets are there selling pizzas, burgers, sandwiches etc. 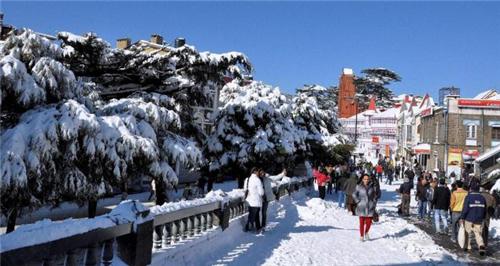 Not only food items but the Mall is the prime center for getting numerous choices of handicrafts, woolen items, Tibetan Accessories etc. Jewelry Items, potteries, decorative pieces, books, and wooden toys are there. Buyers can also get fresh fruits, dry fruits and fruit items at the markets surrounding the Mall.
Lower Bazaar, a market located at the lower area of the Mall has numerous shops selling fresh vegetables, fruits, dry fruits, and also varieties of woolen items like pullovers, caps, rugs, shawls, mufflers, gloves etc.
The Lakkar Bazaar near the Mall is famous for wooden items. It has small toys to big furniture items. The Tibetan Market has items like Tibetan rugs, carpets, Tibetan jewelries, shoes and other accessories.

Important Places around The Mall

There are many interesting tourist places around the Mall. Visitors like to walk down to these places and have wonderful time at Shimla. These places are:

This heritage theater is also known as Amateur Dramatic Club and bears the glory of Shimla’s past days. Cultural events are organized here and this theater complex has seen many national and international theater personalities performing here.

The General Post Office that is located in the Mall delivers mails by Tonga (a horse-driven car). The post office building is visited by many for its wonderful architecture.

The Kali  temple located in the close proximity of the Mall, is an age old temple and has main deity as Goddess Kali. The temple is visited by devotees and others for its unique idol made of wood.

This popular place in Shimla is located at one extreme side of the Mall Road. People come here to enjoy spectacular sight of surrounding mountain ranges. There is a statue of the famous freedom fighter and leader Lala Lajpat Rai mounted here.

One of the oldest churches in Shimla that is located near the Mall. The church is famous for its religious values and architectural marvel. 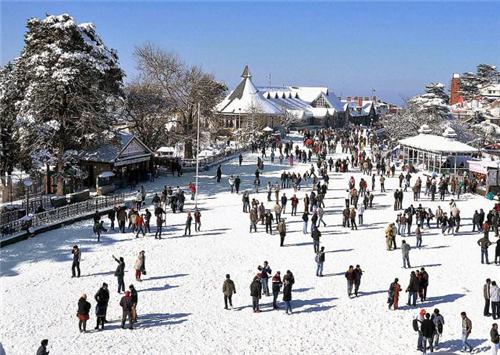 How to Reach The Mall

The Mall, Shimla is located at the center of the city. Shimla can be reached through road, rail and air. From the surrounding areas of Himachal Pradesh and other adjoining states like Punjab, Haryana, Uttar Pradesh, Uttarakhnad, there are plenty of government run buses and private buses available to reach Shimla. Taxi/cab hire are also available in abundance. The journey is comfortable and it is enjoyable for its wonderful surroundings.