One of the Hindu Gods that is worshipped by the Hindus of all ages including the children is the Monkey God, Lord Hanuman. Both adults and children find Lord Hanuman solving all types of problems in their life. Shimla City in Himachal Pradesh is the house of many temples. One of the most popular temples of Shimla that gets the maximum footfalls of the devotees and the tourists is the Jakhoo Temple. Located at a very strategic location of the Shimla City, This temple is known for its architecture as well as for the magnificent Statue of Hanumana in front of the temple. 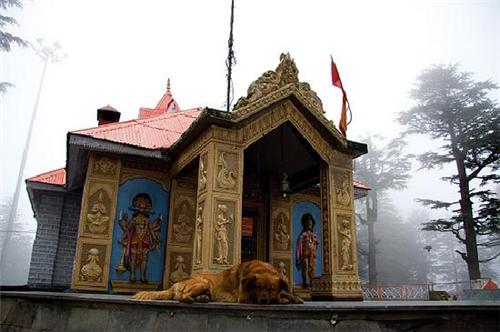 It seems as if the Lord is taking care of everyone in the city and each one in the city is getting blessed by him. Hundreds of monkeys flock around the temple. Visitors can offer foods to these monkey as these monkeys do not harm the visitors.

Historical Significance of the Jakhoo Temple

Hindu Mythology has no dearth of strange characters and one such is “Yakshas”. Yakshas are links between Gods and Humans. It is believed that this hill has derived its name from “Yakshas”. But according to some other legends, it is believed that the place has derived its name from a sage “Yakoo” whom Lord Hanumana had seen sitting here while he was going to the Himalayas to search for “Sanjeevani”, a medicine that was the only solution for saving Laxmana, brother of Lord Rama. During a severe battle between the King of Lanka, Ravana and Lord Rama, Laxmana became unconscious when a powerful arrow shot by Indrajeet (Meghnath), son of Ravana, had hit Laxmana. 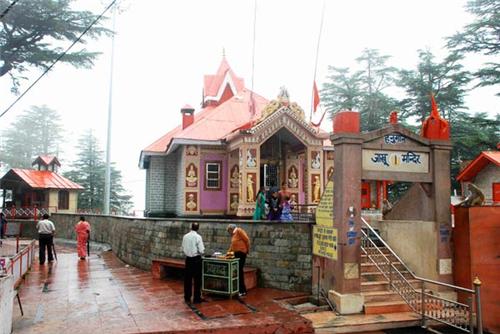 When Susen, the herb expert was called for a solution, he told that only an herb name Sanjeevni, found on the Himalayas could save Laxmana. Lord Hanumana was given the charge to bring the herb before sunrise of the next day and he had to fly over this hill, Jakhoo Hill on the way. On the way he met sage Yakoo and promised him to meet him while he would return back to Lanka with the Sanjeevni. A demon named “Kalnemi” tried to fool Lord Hanumana in disguise and this killed valuable time of Lord Hanumana and he could not meet sage Yakoo while he was returning back to Lanka. 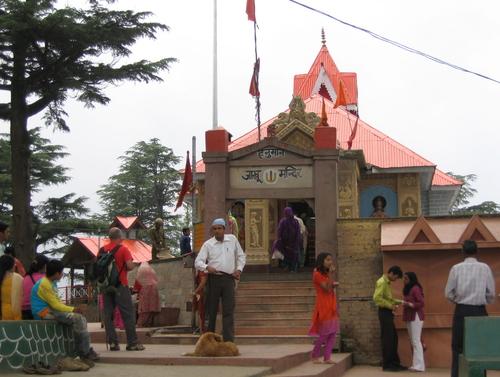 When the sage was disappointed with this, Lord had appeared in person and convinced the sage about the reason of not meeting him. After Lord Hanumana left the place, an idol of the Lord was found there and to show respect to Lord Hanumana, Yakoo Sage had built a temple on the hilltop. It is believed that the monkeys which the visitors get to see here are the descendents of the Lord Hanumana’s friends who had chosen the hills to take rest and stayed here.

The Hanuman Statue at the Jakhoo Temple

The Hanuman Statue installed at the Jakhoo Hill has become one of the most important tourist attractions. It is not only visited by the devotees but tourists of all type come here to witness this architectural marvel. The statue is 108 ft long and is famous as the highest statue of the monkey God in the entire world. The trees around this statue are pruned so well that the statue is visible from miles away from the town. At night when the statue is illuminated with powerful floodlights, onlookers can have the sight of the idol from all parts of Shimla Town.  This statue is mounted at a height of 8500 ft on the hilltop. 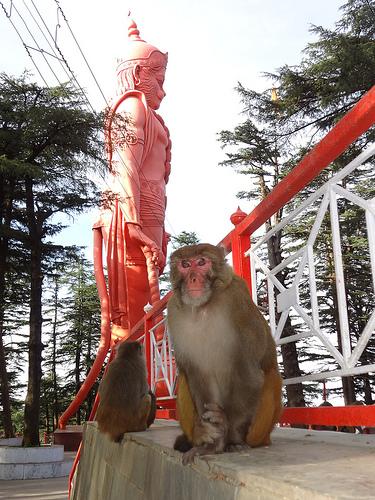 Some other information on Jakhoo Temple

The temple remains open every day from 5 am in the morning till 12 pm. Then the doors get closed and again open at 4 pm and remain open till 9 pm. The total visit duration of the temple is 2 hours.

Places to visit Nearby the Jakhoo Temple

You can find popular places to shop around the Jakhoo Temple. Here are some of the very popular shopping places where you can enjoy doing shopping: 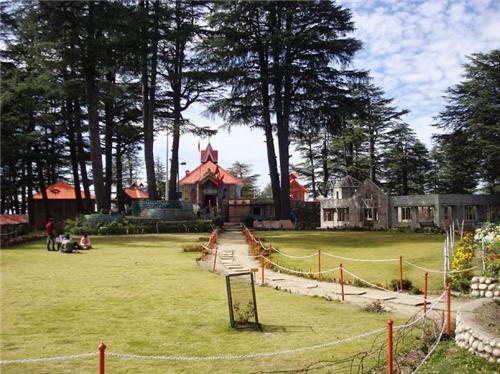 There are a number of restaurants nearby the Jakhoo Temple where you can eat your favorite dish starting from starters to full meals. Some of the famous eating out places are:

Places to Abode nearby Jakhoo Temple

If you wish to stay overnight nearby the Jakhoo Temple, then there are many well known hotels nearby this magnificent temple. Some of them are:

How to Reach Jakhoo Temple Shimla

The location of Jakhoo Temple Shimla is the Jakhoo Hill, on the Shimla-Kalka Highway No 22. The travelers have to take the Circular Road and get into another road, the Ridge-Sanjauli Road. From Shimla, by road it is only 6 km. Private vehicles, government buses or taxi/cabs can be taken to reach here. Devotees and travelers have to trek about 2 km through deep dense forests to reach the temple.