During the British Rule in India, many British people as well as Anglo-Indians used to reside there. Those residents were the followers of Christianity and had requested the government to set up a church for them so that they could worship Lord Jesus. Christ Church is one of the important heritage monuments of Shimla.  The yellow building of this notable church of Shimla is visible from far off. With its excellent architectural marvel and rich historical significance the church remains one of the most important legacies of Colonial India. 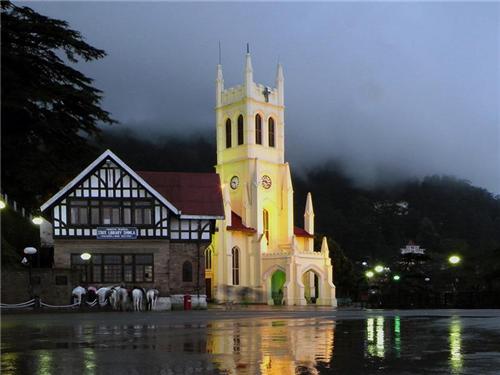 Right now, Christ Church is one of the most notable tourist spots of Shimla. Being located at the most prominent road of Shimla, The Ridge, the church has become an important landmark of the city.

On 9th September, 1844, the foundation stone of Christ Church. For the Divine Services, the church building was given license in 1846 on 11th October.  The church actually became sanctified in the year 1857 on 10th January. The consecration of the Christ Church was done by Bishop Reverend Thomas Daltry.  The total construction was over in 13 years. The total cost of church construction was about Rs40, 000-50,000. 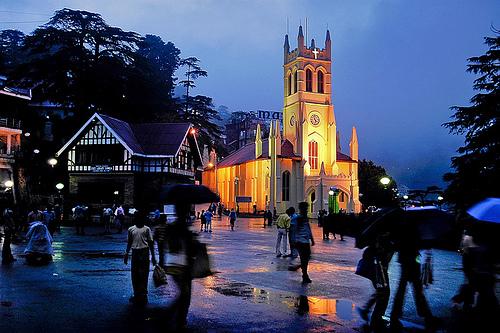 Only Rs. 12,000 was given by the government as a contribution and the rest amount of money came from private sources.

The building of Christ Church had the dimension of 100 ft x 42 ft. At a time about 574 people could sit inside the church. There is provision of increasing the sitting arrangement to about 630. The towers of this church are about 90 ft high. The church has a bell made of brass, a clock and set of 5 tubular bells. The design of the church building was done by Col. J.T.Boileu, a renowned architect of that time. His other famous works were St. George’s Church in Agra Cantonment.

He even contributed in the repairs of several renowned buildings of northern India including one of the greatest monuments, The Taj Mahal.  Shimla even has a township, Boileauganj, named after Mr. Boileau and his brother. 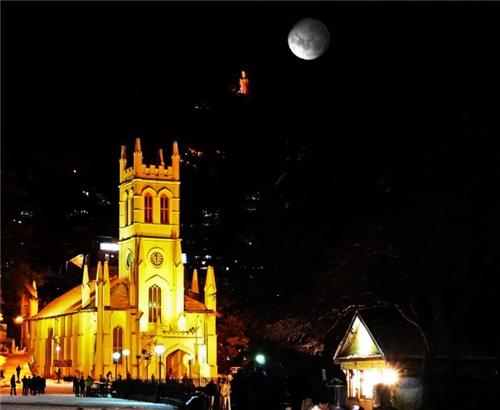 The architecture of this church in Shimla got inspired by Neo-Gothic style. The church was the first religious place built in Shimla for the Christians. The clock installed in the church came as a donation from Col Dumbleton in the year 1860. The church had its porch added in the year 1873. Christ Church has another interesting feature, five glass windows, which attract people of different communities to come here and appreciate it. Each of these windows is made of stained glasses. One of these windows symbolize various virtues of Christianity e.g. Charity, Humility, Fortitude, Faith, Patience, and hope.

The window in the east was constructed in the remembrance of Mrs. Mathew in the year 1890. She was the wife of Bishop Mathew. The work was done by Buelison and Grylls , London.  The Sanctuary Wall Fresco was designed by Mr.  Lockwood Kipling, father of notable writer Rudyard Kipling and it was constructed by the students of Mayo School of Art, Lahore.  Morgan and Smith, Brighton had constructed a pipe organ in 1899, costing about Rs. 23,000. To pay respect to the Bishop of Calcutta, Bishop Milman, the stone Pulpit was made in 1877. Mr. James Walker had presented on glass window (stained) in remembrance of his wife. One of the notable tablets in the church is the one of Major General Godwin, who went for Burma expedition in 1852. 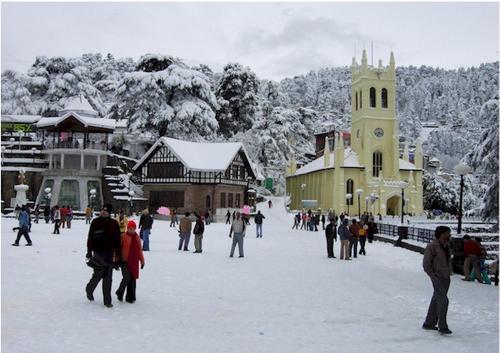 Sir James Walker and Sir Mackworth Young had presented the two costliest stops of this church. Six bells were put in the church in the year 1900. The total cost of the church construction became Rs. 89,000.

How to Reach Christ Church

Visitors can either walk down to Christ Church, located in close proximity of the Shimla US Club. From the heart of the center, visitors have to travel only 3.6 km to reach this church. Many tourists like to spend considerable amount of time at the Ridge and the Christ Church is a must-visit spot for them. Buses and taxis can be used to reach this church but the best mode of enjoying the visit is to walk down. From railway station, National Highway 22 has to be taken and then travelers have to turn to Circular Road that goes towards the Ridge.